Guidemaster: The best gaming headsets for your console or gaming rig

Most people can meet their gaming audio needs with a good pair of headphones. But if you play lots of multiplayer games or frequently use your console/rig to chat with friends, a good gaming headset and its included microphone will make more sense. Unfortunately, the market for gaming headsets remains riddled with junky hardware.

So for Ars Gaming Week, we’re getting you some help. We spent the last three months testing 30 gaming headsets to find the ones most worth buying. Below you can find our current favorites, including options for those on a budget, those with cash to burn, and those who want to go wireless. And, like with all of our Guidemasters, you can consider this a living guide—we’ll be sure to update it as new standouts arrive.

One last note: like most audio-related buying guides, there are personal biases at play when talking headsets. Different people have different sound preferences, and that’s fine. I can only speak to what I like, and as someone who’s used hundreds of headphones over the years as a tech reporter, I like to think my opinions can be of use. All of this is to say that, as with most audio reviews, nobody can tell you what you like, and it’s best to treat this guide as part of a wider consensus that helps you find the products that are worth it.

That said, we’re confident the following headsets will suit most people well.

The best gaming headset for most people: Cooler Master MH751

I wasn’t expecting to like the MH751 as much as I did considering how little cachet Cooler Master has in the audio world. There’s a secret to the company’s success here, though: the MH751 and its pricier sibling, the MH752, are rebadged versions of Chinese OEM Takstar’s Pro 82 headphones, which are something of a cult favorite among audio enthusiasts. They’re not the same thing—the bass adjustment slider on the Pro 82 is gone, and the Cooler Master headsets use a 3.5mm jack instead of the more obtuse 2.5mm port—but the meat of the design is very similar. What changes Cooler Master did make are generally for the better, including a tidier sound and a nicer-feeling pseudo-sanded material on the ear cups.

The key selling point here is comfort. A gaming headset is something you’re likely to wear for hours at a time whenever you use it, so whatever you buy needs to play nice with your head. Because everyone’s head is different, comfort is subjective, but the MH751 is as close as I can get to guaranteeing something will feel pleasant around your ears. It was easily the most comfortable of the 30 gaming headsets I tested, and it ranks among the most agreeable headphones I’ve ever worn as a whole. Again, the secret here is shameless copying: the Takstar Pro 82 more or less rips off the design of Sony’s MDR-1A, which I am on the record as calling nicest-feeling headphones I’ve ever used.

The MH751 can’t reach those heights, but its leatherette ear pads have ample amounts of soft memory foam padding and plenty of space to fit the whole of your ears. They rest gently against your temple instead of clamping down too tight. While the headband doesn’t have as much padding, there’s enough to present no problems. The design feels good and light because it balances its weight so evenly. Adjusting the headband is smooth, with light clicks to indicate your calibrations, and there is a generous amount of room to make those adjustments. The result of all this is a headphone that should fit even the largest heads with aplomb and remain pleasing to wear for multi-hour play sessions. (Your ears may get a little sweaty over time, but that’ll happen with almost any over-ear headphone.) To be clear, when I say “even the largest heads,” I’m talking about myself. When I get this enthusiastic over a headphone’s feel, it should give you particular reassurance.

That comfort wouldn’t mean much if the MH751’s sound was subpar, but that’s very much not the case. The operative words here are neutrality and balance. No one part of this sound signature dominates the other: bass is present and well-measured but not boosted, mids are realistic and detailed, highs are clean and not fatiguing unless you dial the volume up to dangerous levels. The soundstage is wide enough for a closed-back headphone, and imaging is strong, so you’ll be able to pick out enemy footsteps in a first-person shooter and the like. It’s not a flat sound profile, but it’s decidedly flatter than most gaming headsets. You mostly hear things as they were mixed to sound. If anything, some people may wish it less balanced in the low-end, since bumped-up bass can give explosions and other action game sound effects more impact. There’s also no virtual surround sound support—there is in the MH752—but that has never made or broke the quality of a gaming headset, since that tech is largely dependent on what game you’re playing. The components and tuning of the MH751 is good enough to outclass the sound of many pricier headsets that do include 7.1 surround.

I don’t want to overstate things: this is still a sub-$100 headphone, and you can get more detail and crisper treble on slightly more expensive headphones. But compared to most headsets, even ones closer to $200, the MH751 hits what it’s going for and gives little to complain about.

Similarly, the MH751’s microphone punches above its price range. It gives voices a good sense of fullness and clarity, and it does a good job of suppressing outside noise—not the best, but good. You can hear a sample of me using it below. (And yes, I thought the idea of reading Dickens in a post about gaming headsets would be funny.) The mic is flexible enough and totally detachable, and it locks tightly into place when it is connected.

On top of all of this, the MH751 doesn’t look like a gaming headset, which is one of the biggest compliments I can give any gaming headset. There’s no gaudy RGB lighting and the Cooler Master logo on the side doesn’t look like something a bunch of guys in a board room thought would appeal to energy-drink-swilling “gamers.” While the all-black finish isn’t the most exciting thing in the world, and there’s too much plastic to say the headset feels out-and-out premium, in no way does the MH751 feel flimsy or creaky. It’s very much something you can wear outside without getting looks. The braided cable is a bit long and places the volume/mic mute controls slightly too far down, but like the mic it’s removable, so you can always swap in a more travel-friendly cord if it bothers you. Isolation is just OK, though, so you might still hear louder noises if you’re playing with the volume at a low level. The ear cups don’t fold up, either. Still, this is light and handsome enough to work as a good mobile headphone.

All of this means the MH751 isn’t just good for a gaming headset—it’s a legitimately strong pair of headphones with a quality mic. It’s great for gaming, great for audio enthusiasts on a budget, and great value.

$79.99 from Abt
(Ars Technica may earn compensation for sales from links on this post through affiliate programs.)

The MH751 is sometimes available in the $60-70 range—at that price, it’s worth the premium over any budget headset. (It became somewhat low in stock online in the days before this guide was published, but a Cooler Master representative told me the shortage is only temporary.) If you’re determined to spend no more than $50, though, the HyperX Cloud Stinger should serve you well. It’s a downgrade from the MH751 in almost every way, but its energetic sound and relatively comfortable design make it a good buy for those on the cheap.

The Cloud Stinger has what’s known as a “V-shaped” sound signature: it boosts the low- and high-end frequencies at the expense of a more recessed mid-range. The bass is particularly hyped-up, but all that added thump feels more fun than overblown in practice. The highs are present to the point of fatigue at the highest volumes, but they’re neither overly dulled nor sibilant. Imaging is excellent as well, and distortion is low. All of this makes for a sound that isn’t balanced or natural for music, but it works well for gaming: the powerful low-end gives explosions and shotgun blasts more oomph, the bump in the treble and high-mids makes enemy footsteps more prominent, and all of it puts sounds where they’re supposed to be. The laid-back mids do make you miss out on some finer details, but for the price and the point of the headset, it sounds good.

Similarly, the Cloud Stinger’s microphone isn’t top-notch but performs well for a $50 headset. It does well to keep voices audible within background noise. Speech is consistently clear, though it lacks some airiness and sparkle in the treble and makes voices sound slightly duller then they’d sound on better mics as a result.

The design here has its ups and downs. On the plus side, it’s comfortable, with spacious ear cups, a highly adjustable headband, and a good amount of memory foam padding on both. It’s a bit stiffer on the ears than the MH751, but so are most headsets. What’s here isn’t stiff at all and it’s lightweight. The Cloud Stinger is a few years old at this point, but this design is still more pleasant than many headsets that cost twice as much.

That said, the plastic-heavy exterior feels like a $50 headset. The ear cups don’t fold up. The microphone isn’t all that flexible. It leaks noise at higher volumes, and it’s mediocre at isolating external noises. And both the mic and the 3.5mm cable are permanently attached. Combine all that with the big red HyperX logo on the sides, and you have a headset that’ll look very goofy outside of the house. (HyperX announced new PS4- and Xbox-themed versions of the headset shortly before this guide was published, but a HyperX rep says the new models have the same technical specs as the existing pair.) Still, if you’re specifically in the market for an affordable gaming headset, these shouldn’t be dealbreakers. For the money, the Cloud Stinger is a fun time where it matters the most. 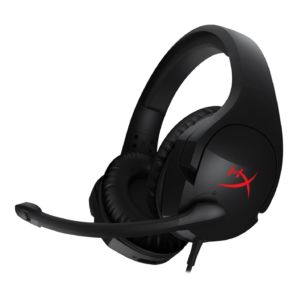 Buy Now
(Ars Technica may earn compensation for sales from links on this post through affiliate programs.)