Dwell Secure works with New York Software Developers to create a disaster preparedness app that seeks to save money and potentially lives.

Home is perhaps one of the more important aspects of people’s lives, yet many people lack the knowledge they may need in case of an emergency at their residence and find themselves unprepared and ill-equipped. And when there are widespread issues, such as from a storm or other disaster, worried homeowners could find themselves in trouble – or even in danger – if local emergency resources are overwhelmed. This very idea is what inspired Andrew Leith to create Dwell Secure, a new disaster preparedness app designed specifically for property owners.

Leith, Founder and Chief Executive Officer of Dwell Secure and a firefighter, knows all too well that when disaster strikes, 911 centers are deluged with calls, and resources can become scarce. This means home emergencies may not get attended to as quickly or at all. When this happens, homeowners can be left with costly damage or, worse, find their safety in jeopardy.

To make Dwell Secure a reality, Leith is working with New York Software Developers in New York City. The new firm was founded by technology veterans on the West Coast in Seattle, and the team at NY Software Developers works closely in tandem with its sister company, Seattle Software Developers, which is over 30 years old and boasts a team of developers who come from brands such as Google, Microsoft and Apple. Together, NYSD and Leith are working closely to get Dwell Secure into the hands of homeowners across the country and help prevent disasters due to limited resources from occurring.

How two decades of experience showed the need for resources

Leith serves as captain of the Shoreline Fire Department in the Seattle area and has been there for 20 years. He is also a rescue swimmer and technician, in addition to being on a FEMA team. As a professional who responds to disasters, Leith knows from his years of experience how sometimes, such as during large storms, local emergency resources get overwhelmed. This means there aren’t enough staff to respond to all 911 calls. In order to help alleviate this problem, Leith created Dwell Secure.

Dwell Secure is a disaster preparedness app specifically designed to help people in emergency situations by providing instructions and resources.

“It’s for disaster preparedness or a time when local emergency resources are overrun with calls and don’t have the staff to respond to all the 911 calls,” he said.

Leith, who has experience in teaching disaster responsiveness, said people need to know how to secure their own utilities at home instead of waiting for a response team. This can happen when there are storms, disasters, outages and more.

“Gas is the most important,” he said. “The big concern will be broken gas lines inside structures that will need to be shut off at the building meter. There won’t be personnel to respond to your residence.”

Leith said problems such as arcing wires or gas concerns become low on the priority list when the volume of calls is large. With Dwell Secure, homeowners will have the knowledge to secure their own utilities, such as shutting off the water, at their fingertips.

“This app is a way to give the homeowners a way when there’s no response,” Leith said.

At first, Leith wasn’t sure how expansive the need was for an app like Dwell Secure, mainly believing it would apply to people in metropolitan areas. However, Leith decided to start Dwell Secure after receiving encouragement from a neighbor who grew up on a farm and said the app would be a valuable resource even to people with more extensive knowledge about homes.

How the disaster preparedness app works

When a user downloads Dwell Secure, they’ll receive free access to content regarding gas, water and power. These will serve as resources for them should they ever find themselves in an emergency and first responders aren’t able to get to their homes in time.

“Everyone should know how to do that,” Leith said.

The app also has recording functions and instructions. Users will also be able to follow customized visuals, for example, stock photos of a gas meter or electric panel that they can replace with an image of their own. This customization tool would save precious time for homeowners in case of an emergency, as their exact property details and appliances would already be in the app.

“There will be an aerial photo of your property and you can mark the location of those things,” Leith said.

Users will also be able to enter contact information for appropriate professionals, such as plumbers. By upgrading for $4.99, users can enter as many home details as they want – from their refrigerator to their water filters to their furnaces.

Another way Dwell Secure will allow property owners to be proactive is through maintenance check reminders. The app will help homeowners keep up with necessary maintenance that they may put off or forget to do, which could have the potential for disaster later on.

Leith said he sees Dwell Secure becoming a very useful tool for people newly purchasing a home, where home inspectors can go through and take pictures of the house and have it on file on a mobile device, rather than relying on traditional home binders.

With Dwell Secure, there are also commercial applications, such as for safety officers at a plant or for commercial machines like wood chippers, sprinkler systems, elevators and more. He also sees Dwell Secure being a key resource for renters or AirBnB guests.

The importance of investing in home knowledge

Leith said people should invest in home security and maintenance because often when disaster strikes, it’s too late. Whether it’s gas leaking in a home or cell towers that are down, having the knowledge and resources is vital.

“It’s imperative that everyone be able to take care of their own homes and dwellings,” Leith said. “Resources will come, but it may be a while.”

Leith said this knowledge is not common, but it’s not anyone’s fault. Most people do not know they need to know it, which is why Dwell Secure could serve as a saving grace in some cases for people.

As far as the future of Dwell Secure, Leith said he hopes everyone will obtain the knowledge they need to take care of their own places when the local resources are overrun.

“It would be great if this became standard with every real estate transaction,” he said. “Even if it’s water damage or broken pipes, this could stop billions of dollars in damage.”

To help Leith’s idea come to life, he began working with New York Software Developers to hit the ground running and ensure that the app would be user-friendly and include all of the features that he envisioned. To accomplish this goal and ensure all the features work correctly, having highly experienced and dedicated partners like the team at NY Software Developers has been crucial.

Leith said he is someone who knows little about tech, so when he met with the developers at the agency and they began work, he was thrilled to see the idea he had become a real, functioning app. 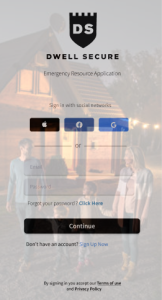 As the lead development firm behind Dwell Secure, New York Software Developers took the project from concept to minimum viable product. The firm developed Dwell Secure entirely from scratch in Native iOS and is now building it in Native Android.

With a highly skilled team comprised of full-stack developers that have been doing software development for over 20 years, NYSD is working tirelessly to bring Dwell Secure to fruition. The app is scalable for high volume usage and is being developed in Native code using AWS technologies.

New York Software Developers is a full-stack team, which means it provides all services ranging from basic websites to complex IoT, AI, and Machine Learning development services. The firm is a one-stop shop that walks the client through the entire process and counts client servicing as one of its top differentiators. The firm often works with entrepreneurs and start-up companies in bringing their dreams and goals to life while also developing a brand.

“We start with the basics that help us scope out the work,” said Tarasov. “Once the MVP is determined, our team starts the software life-cycle. This includes planning, wireframing, architectural design, the actual software development, testing and deployment.”

Between Leith’s brilliant vision and experience and the expertise and cutting-edge approach of New York Software Developers, Dwell Secure is sure to be an app that is not only helpful to people, but is also easy to use and forward-thinking.

“If property owners had an easy way to access this information, they could save their property from being damaged as well as save the city money and time,” Tarasov said. “This application will save thousands of dollars in unnecessary emergency calls, repairs, and, most importantly, it can save lives.”