Guidemaster: Picking the right Thunderbolt 3 or USB-C dock for your desk

Tech
Publisher
November 7, 2019
Facebook
Twitter
Pinterest
ReddIt
Update: After publishing our original Thunderbolt 3 or USB-C dock recommendations in July 2018, Ars has been testing new docks and hubs on and off ever since. Below, we’ve updated our picks ahead of the 2019 holiday shopping season.

The introduction of USB-C and Thunderbolt 3 ports and the transition away from legacy ports hasn’t been smooth.

PC and smartphone OEMs began using USB-C ports a few years ago because they allowed companies to make thinner devices with faster ports. Gargantuan in comparison, USB-A ports we all know and love from thumb drives take up a lot of space on devices, they don’t handle data transfer as efficiently as new ports, and they’re limited when it comes to multiple connections and charging.

USB-C and Thunderbolt 3 are the way of the future, but most of our accessories are stuck in the past. PC and smartphone OEMs lead the way by adopting USB-C as standard, but that often leaves users to search for an adapter or dongle to connect all of the peripherals they already have. On top of that, many new peripherals are still using the old connections.

Rising to the occasion are USB-C and Thunderbolt 3 docks—boxy devices punctured by USB-As, HDMIs, DisplayPorts, and SD card readers—and other ports. A dock or hub connects to all your peripherals so you can then connect it to your PC through just one USB-C port. But not all docks are created equal. After reviewing a wide array of what’s available today, we’ve found there are a few key features users should look for to determine which option is best for you to bridge the gap between your PC and everything you want to use with it.

If you’re interested in the differences between Thunderbolt 3 and USB-C, or learning more about how we tested each dock, check out our Testing Methodology section.

CalDigit’s unassuming, industrial-looking TS3 Plus Thunderbolt 3 docking station provides the best combination of performance, port selection, and design versatility out of all the Thunderbolt 3 docks we tested. It not only has the smallest footprint of them all—it also has the most ports.

Most users will have no trouble connecting mice, keyboards, and other legacy peripherals using its five USB-A 3.1 ports, and its four USB-C ports offer an array of connectivity options. Two of them are Thunderbolt 3 ports (one of which is the PC connector port), while the other two are USB-C 3.1 Gen 1 and USB-C 3.1 Gen 2, giving you various transfer speed options to choose from.

As evidenced in our benchmark charts, CalDigit’s TS3 Plus didn’t always produce the fastest transfer speeds or read/write speeds, but it was consistently one of the top performers. The differences in results among our top three choices were usually minimal, as all of them produced read/write speeds close to the default read/write speeds produced when the Samsung T5 SSD was connected directly to the MacBook Pro or XPS 13 2-in-1 via a Thunderbolt 3 port.

The TS3 Plus charged the MacBook Pro and the XPS 13 fairly quickly—the MacBook Pro went from 50 percent to 100 percent charged in just over one hour. The device took the longest amount of time to charge the iPhone 6S Plus through one of its charging-capable USB-A ports. But even then it took just two minutes longer than Plugable’s Thunderbolt 3 dock and 13 minutes longer than Cable Matters’ device. Also, all of the TS3 Plus’ USB-A ports support 7.5W charging, allowing you to power up more than one accessory at a time. Most other docks we tested had just one charging-capable USB-A port.

Using this hub’s DisplayPort and Thunderbolt 3 port, users can connect up to two 4K 60Hz displays or one 5K 60Hz display. You will need an adapter to achieve the highest-possible refresh rate and screen fidelity as you connect more than one display at a time. But the option is there for you.

The TS3 Plus’ design set it apart from the competition. The relatively small, silver metal box measures 5.15 x 1.57 x 3.87 inches and spreads its ports out thoughtfully across the two longest sides. The back contains the PC connector Thunderbolt 3 port plus an additional Thunderbolt 3 port, four USB-A 3.1 ports, one USB-C 3.1 Gen 2 port, one DisplayPort, one Gigabit Ethernet port, one S/PDIF digital optical audio port, and the DC power port. The front houses an SD card slot, analog audio in and audio out ports, one USB-C 3.1 Gen 1 port, and one USB-A 3.1 port.

I especially appreciated the variety of front-facing ports because they make connecting temporary peripherals and accessories easier. Depending on your setup, access to the back of the dock might be blocked or covered by a web of cables—finding a port like a headphone jack among a sea of other connectors on the back of a dock would be quite frustrating in that situation.

A light gray, rubber-like pad covers the bottom side of the TS3 Plus, allowing you to position the dock horizontally or vertically without scuffing up your desk. Most other docks take up a lot of space as they lay horizontally on your desk, so the added flexibility of the TS3 Plus’ design is a convenient perk. The dock is made better by CalDigit’s Docking Station Utility program (available as a free download from its support website) because it lets you disconnect individual accessories connected to the dock. You can clearly and safely choose to disconnect your eGPU and external drive without disconnecting any other accessories like displays and mice, for example, or choose the option to disconnect all devices at once.

CalDigit’s TS3 Plus is the dock I’d want on my desk going forward, not only because of its design, but also because of its performance and well-rounded port selection. It may be slightly more expensive than our other top picks, but its perks justify the $299 price tag.

$309.99 From Amazon
(Ars Technica may earn compensation for sales from links on this post through affiliate programs.)

Cable Matters’ Thunderbolt 3 dock makes compromises in versatility, but thankfully not in performance. Compared to CalDigit’s TS3 Plus, this dock has the same number of USB-A ports, but it lacks additional USB-C ports, it doesn’t support S/PDIF output, and it only has 60W charging power for your host laptop. Also, only one of its USB-A ports supports charging, so you can only charge one phone, tablet, or other device at a time.

However, its performance is quite good. The Cable Matters Thunderbolt 3 dock beat CalDigit’s dock on most of our benchmark tests, albeit by a slim margin. Our top three choices all produced fast transfer and read/write speeds, so all of them will work quickly and efficiently when transferring data. But if speed is the most important factor for you when choosing a Thunderbolt 3 dock, Cable Matters’ device is the one to get.

The device has an HDMI port for video output rather than a DisplayPort, so keep that in mind when buying the appropriate cables and adapters for your monitors. It’s also possible to connect a second 4K display through the second Thunderbolt 3 port (the one that isn’t designed to connect to the host PC), but you will need an active USB-C cable to do so.

The Cable Matters Thunderbolt 3 dock won’t look as sleek on your desk as CalDigit’s device because it’s just a long, metal-and-plastic slab that can only sit horizontally on your desk. I appreciated the ports accessible on the front of the device (two USB-A ports, the SD card reader, and a headphone/mic jack), but the rest sit along the back edge of the device. While there’s nothing wrong with the design, it’s boring in comparison to CalDigit’s and Plugable’s devices (the former of which we’ll get to in the next section). However, that’s one of the compromises you’ll make for the $219 device. Overall, it’s a solid dock with great performance at a decent price. 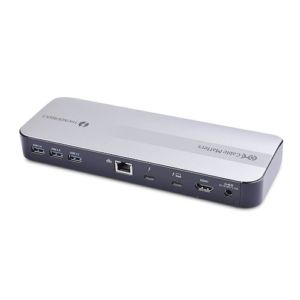 $239.99 From Amazon
(Ars Technica may earn compensation for sales from links on this post through affiliate programs.)

CalDigit’s new Pro Dock is not only a well-priced Thunderbolt 3 accessory at $199, but it will work seamlessly when connected to either a Thunderbolt 3 and USB-C PC. As we explain above, there are a number of differences between Thunderbolt 3 and USB-C, and some features are only available on devices with Thunderbolt 3 ports. CalDigit’s Pro Dock will adapt to work precisely regardless of which level of USB-C port you connect it to, making it a good option for those who are unclear which connector their PC has (or if those getting it as a gift and don’t know the specs of their recipient’s PC).

The Pro Dock is also compatible with the newest iPad Pros, allowing users to connect the tablet to an external display as well as connect peripherals and accessories like external hard drives.

We were impressed with the Pro Dock’s data transfer speeds, and since we test these docks with a MacBook Pro and an XPS 13, you’ll notice the speeds are quite high because the Thunderbolt 3 ports on those laptops support faster data transfer speeds.

While the device has a good array of ports, it only has one extra Thunderbolt 3 port that it only supports data transfers. You won’t be able to daisy-chain a monitor through this port, but CalDigit added two display ports on the back edge of the device to make up for that. But the Pro Dock can be daisy-chained in a sequence if it’s added to the very end of a Thunderbolt 3 daisy-chain, just keep in mind that you’ll see weaker performance in the Pro Dock (as well as other devices) the further away in the chain it gets from the host PC.

Despite the daisy-chaining inconvenience, the CalDigit Pro Dock provides a lot of value for its $199 price tag. Most Thunderbolt 3 docks still sit above the $200 mark, so it’s a good option for those who have a tighter budget as well as those who want the convenience of a dock that works well with both Thunderbolt 3 and USB-C PCs. 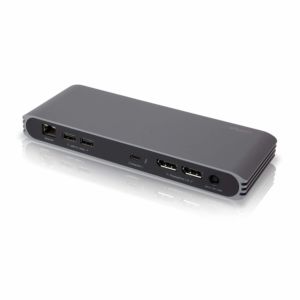 $199.99 From Amazon
(Ars Technica may earn compensation for sales from links on this post through affiliate programs.)