When Bosses Threatened to Close the Plant, These Greek Workers Took It Over

One day in May 2011, during the peak of Greece’s financial crisis, Alekos Sideris and his coworkers at Vio.Me, a producer of industrial adhesives in the northern city of Thessaloniki, were greeted with grim news.

The management’s parent company, Philkeram Johnson, had once been a profitable enterprise, employing 350 people and exporting ceramic tiles to 29 countries.

Now, saddled with $5.3 million in debt, it was filing for bankruptcy, and Sideris and his 69 colleagues would all be flung into the job market in a country where more than one in five people were already without work. After more than a year of delaying paychecks, the company was ready to close up shop and walk away, despite owing more than $1.7 million in debts and compensation to its employees.

Sideris, a burly, now 51-year-old with a dense goatee, had worked at the factory for six years as a machine operator. When he heard about the bankruptcy, his first thought was for his wife and two daughters at home. “It was a huge shock,” he told The Nation. “When you hear that you are going to lose your job, you start thinking [about] the responsibilities you carry, like your family and kids.”

But rather than passively accept his fate, Sideris banded together with his co-workers to fight back. Forty employees decided to occupy the roughly 25,000-square-foot factory and continue their daily work, surviving mostly on unemployment checks. “The thought of leaving behind all of this and going into unemployment was never there,” he said. “We didn’t accept the debts of the bosses.”

After months of failed negotiations with the Ministry of Labor, and unsuccessful appeals to central trade unions for help, the remaining workers of Vio.Me cast a vote—and by upwards of 97 percent, they agreed to reopen the factory and run it on their own. By February 2013, the production line was up and running again, but it was now churning out new products: eco-friendly soaps, detergents, and fabric softeners.

Today, the Greek government, currently led by the left-wing Syriza party, is celebrating what it calls the end of the economic crisis. On August 20, the country will officially exit the European bailout program, but the working class, which has been devastated by a decade of crippling austerity measures—including pension cuts, shrunken wages, and tax hikes—has little cause for rejoicing. Unemployment still hovers around 20 percent, part-time work is on the rise, and the minimum wage has decreased by about one-fifth since the beginning of the crisis. Against that backdrop, workers across the country, including those at Vio.Me, fear their own crisis is far from over.

Vio.Me’s history is one of a gradual evolution from a desperate response to impending layoffs to a radical experiment in self-management. And the 23 remaining workers say they have created a model that can help struggling workers fight back in the face of yet more hardships.

Drawing inspiration from factory occupations in Argentina in the early 2000s, they abolished hierarchy, creating a structure based on the idea that all workers are equal. Unlike many cooperatives, which maintain a hierarchical structure, Vio.Me’s staff now share responsibilities such as cleaning and guarding the premises, and each employee makes the same hourly wage. A general assembly has replaced bosses.

Sideris had been active in union politics for several years, but he had never imagined that he would one day be on the front lines of Greece’s most ambitious exercise in self-management. “I think that this is like a great school,” he said, explaining that putting politics into practice is at times an arduous process of trial and error. “Sometimes theories work, but many times they don’t.”

Before the occupation, Sideris played a single role at the factory, unpacking incoming materials and loading outgoing shipments. Today, workers rotate in their duties and responsibilities, having learned from one another how to perform tasks they hadn’t done in the past. “You have so much to give and receive, and the knowledge and experience is transferred from one person to another,” he said.

A sign at the Vio.Me factory in Thessaloniki, where workers have operated the factory on their own for the last five years. (Nick Paleologos / SOOC)

After discussions with the surrounding neighborhood, Vio.Me stopped producing things that required harmful chemicals, switching to the eco-friendly cleaning and hygiene products for which they are now widely known. Hoping to play a positive role in the community, they also established a health clinic to provide services for both the workers and other crisis-struck Greeks living in the surrounding area.

Challenges mounted early on, though, and they were forced to navigate a slew of legal and bureaucratic obstacles. Perfecting recipes for their products was a challenge. Lacking access to traditional markets, Vio.Me had to rely on a network of activists and supporters known locally as the “solidarity economy.” Cutting out distributors, they sell via an online store, at left-wing political festivals, and directly to their clientele: everyday Greeks, mom-and-pop stores and green-friendly cooperative businesses. This model brings in comparably smaller revenues, however, and Vio.Me still finds it is hard to compete with larger, traditional companies.

Additionally, as was the case for thousands of shuttered factories across the country, the property on which Vio.Me sits was put up for auction. To add to the complications, although they registered the Vio.Me brand, the workers didn’t have a legal claim to the equipment and machines, and some of it was repossessed. Authorities came several times to turn off the electricity, but solidarity activists from the area mobilized and blocked entry to the factory. Eventually, the unemployment benefits ran out, as well.

On average, each worker takes home around $415 a month, a salary much lower than before the occupation. In order to keep their families afloat, some employees take on side jobs. “It’s a solidarity income, as we call it,” said Spiros Sgouras a 47-year-old who ditched his IT job to join the cooperative. “But occupying a factory and using it for industrial production in a self-managed way is a step toward a post-capitalistic economy. It’s about evolving, making something new for the future.”

The barriers remain numerous, though, and the threat of eviction always looms. The premises are expected to go back on the auction market in September, where the reduced price could attract potential buyers keen on investing in the broader property. Vio.Me sits on one-fifth of the total land up for sale, and the workers fear the property’s purchase could provide a bank-appointed liquidator with the immediate political authority to kick them out once and for all.

At lunch, a handful of Sgouras’s compatriots gathered for a shared meal of sesame seed–blanketed bread dipped in olive oil. On the office walls were anti-fascist flags, posters proclaiming solidarity with the Zapatista Army of National Liberation and with various worker-led actions across the globe.

Dario Azzellini, coauthor of Ours to Master and to Own: Workers Control from the Commune to the Present and a professor at Cornell University, said that factory takeovers are “something that workers have always been doing” during times of political upheaval, class struggle and war.

“These workers in Vio.Me show that they don’t need anyone else to run the factories,” he told The Nation. “They have a very democratic and assembly-based decision structure.… They have the experience of taking things into their own hands, and it has led them to rely heavily on solidarity.” 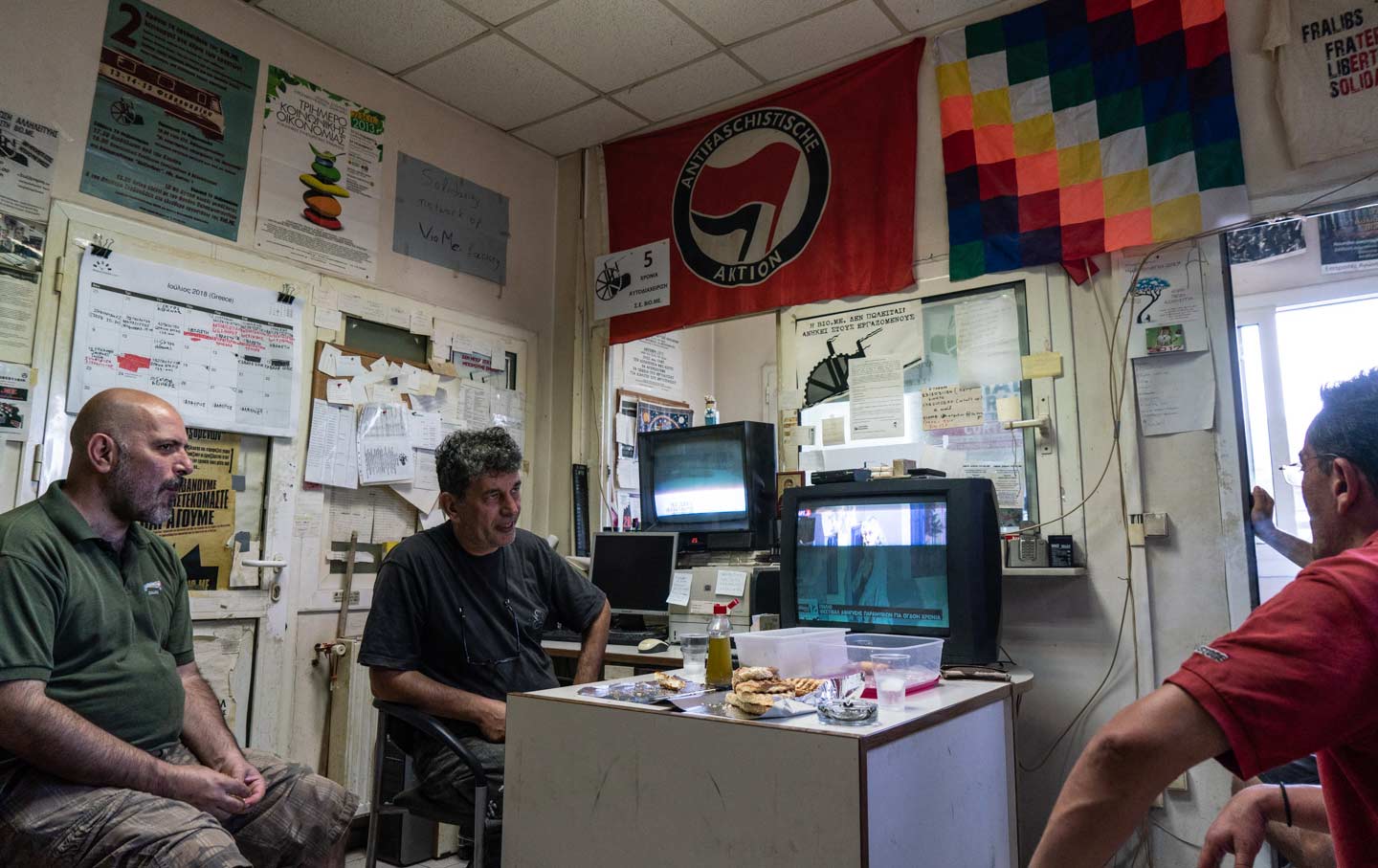 Spiros Sgouras, Dimitris Nikolaidis, and Fotini Balzoi (left to right) sit in the break room during a shift in July. (Nick Paleologos / SOOC)

While Vio.Me stands out as the most successful initiative of its type, it has built strong ties with other anti-austerity movements in Greece, and with occupied and self-managed workplaces in other countries from Europe to Latin America. In 2015 and 2016, Vio.Me workers rallied to distribute humanitarian aid to refugees bottlenecked on the country’s northern border.

They enjoy close relationships with squats and cooperatives across the country. Many of those projects are now under attack, while others were quashed as part of the Greek government’s crackdown on opposition to the austerity regime.

In 2013, with the right-wing New Democracy party heading the government, steps were taken to close down ERT, the state-run broadcaster. In response, the station’s reporters and operators occupied the studio and maintained a 24-hour broadcast. They kept control of ERT for five months, until riot police finally raided and evicted them.

Syriza came to power in 2015 on promises of abandoning austerity, but critics say the government has reneged on its campaign pledge. Under Syriza’s watch, authorities have increasingly targeted occupied spaces, including left-wing and anarchist squats that serve as social centers, health-care providers, and residences for Greeks and refugees alike. This March, police stormed three squats in Athens, kicking out the inhabitants and arresting a dozen activists.

But a wave of solidarity has saved some occupied spaces, at least for the time being. City Plaza, an activist-occupied hotel that provides residences to some 350 refugees and migrants, has managed to avoid eviction by rallying supporters for large protests, and physically blocking authorities from cutting off their electricity and water.

When the government moved forward with plans to evict the Metropolitan Community Social Clinic in June, the occupied health-care center received, according to the clinic, “an unprecedented show of support from individuals and organizations” in Greece and beyond. Protests were staged in Greece and outside its embassies in other countries. More than 130 doctors, academics, trade unions, and politicians from across Europe wrote angry letters to the Greek government. A German member of the European Parliament, Rebecca Harms, called on the European Union’s legislative body to intervene. In response, the Greek government backtracked, postponing the eviction and offering to relocate the clinic to a new building as a compromise.

Back at Vio.Me, the workers believe this brand of grassroots support is their best shot to keep the project alive, but they are also open to compromise. If the property is sold, they propose that the government legalize their presence on the part of the property where their facilities sit.

“Vio.Me is a blueprint for struggle,” Sgouras said. “We describe ourselves as a model for a different society, a totally self-managed society. It’s part of a global struggle, one that has managed to survive only through solidarity.”

For his part, Sideris said that Vio.Me is part of a much larger fight, at the heart of which is a desire for dignity and resistance. If the day does come when police swarm the building, he insisted that they don’t plan on going easily. “When you occupy a factory and the means of production, you are obliged to defend it to the end,” he concluded. “In contrast with what the bosses did, you are here to stand up for this [factory] as a way of life.”

NYC Man Fatally Shoots Mom After She Asked Him to Get a Job, Family Says

NYPD cop shot in the Bronx

Previous articleA review of Monitor-IO, a little gadget that wants to talk about your Internet
Next articleLogitech gets into the vertical mouse game with the MX Vertical

NYC Man Fatally Shoots Mom After She Asked Him to Get a Job, Family Says

A woman who was found dead inside her New York City apartment was allegedly shot by her own son following a conversation about him...
Read more

NYPD cop shot in the Bronx

A plainclothes NYPD cop investigating a past shooting was shot while chasing a man in the Bronx on Tuesday night, police and sources said. ...
Read more