Gastroesophageal reflux disease, also known as GERD, affects millions of people in the United States. It is often referred to as heartburn and causes major discomfort and problems for patients. While many people begin managing their acid reflux through lifestyle modifications, sometimes it’s not enough and they are prescribed medicine. But for one physician who suffers from longstanding GERD that led to severe esophagitis, which was a life-changing event, taking medication for the rest of his life didn’t seem like an ideal route. So, he created a natural way to help manage GERD.

GerdLi, the world’s first natural antacid supplement, is meant to be used along with a healthy lifestyle to help manage GERD. Dr. M, the creator of GerdLi, was inspired to develop GerdLi after being hospitalized twice and put on prescription medication for life – despite only being 31 years of age. He figured there had to be a more natural way to manage symptoms, and after more than three years of trials and testing, GerdLi came to be with the goal of helping people on a path toward better health.

A natural alternative for patients who are taking anti-reflux prescription medications, GerdLi was created for patients to use as a complement to a healthy lifestyle. The supplement uses D-limonene to help naturally alleviate the symptoms of GERD so that patients can have a more natural choice to feel better.

GERD is a condition that affects millions of people and is likened to recurring acid reflux, or heartburn. Symptoms can include sour taste, burning in the chest, difficulty swallowing, respiratory difficulties, nausea and more. GERD can occur in people of any age, and some known causes are obesity, pregnancy, certain medications or smoking. However, it’s common for GERD to happen without a known, identifiable reason. Established data shows that up to 30 percent of Americans suffer from GERD.

GERD is a clinical diagnosis and patients are typically diagnosed after undergoing various tests. The first test is a barium esophagram, which is essentially an X-ray that is used to evaluate the esophagus’s structure and function. A physician will usually order this test when a person has reported having problems with swallowing.

An esophageal manometry is another test, and it is used to determine lower esophageal sphincter pressure as well as the strength of the esophagus. According to Dr. M, this is the best test to diagnose GERD. An upper endoscopy may also be conducted to let the physician see if there is esophageal injury.

For many people, the first method of managing GERD is making lifestyle changes. This can include reducing intake of caffeine and alcohol, eating smaller portions or cutting out carbonated beverages like soda. Fatty foods can also be detrimental, as they slow gastric emptying, and large meals should be avoided in order to decrease gastric pressure. Sleeping in an elevated position also often helps patients with GERD feel relief.

Reducing or completely quitting smoking is another approach to managing GERD if applicable to the patient. Smoking affects the motor function of the esophagus, promotes acid secretion and slows gastric emptying, which prompts reflux. For patients who are overweight, weight loss is recommended to help reduce the frequency of reflux.

In addition to lifestyle modifications, sometimes prescription drug therapy is used to help patients manage their GERD. Typically, patients will be prescribed acid-suppressing agents and drugs that promote upper gastrointestinal motility. Prescription medications for GERD, such as proton pump inhibitors, have many side effects attributed to them. Some of the side effects associated with them range from nausea and vomiting to chronic vitamin B12 deficiency and fundic gastric polyps.

A natural approach with GerdLi 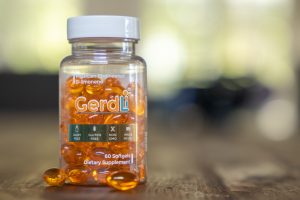 GerdLi is revolutionary as it is the world’s first natural antacid supplement. It was created using a custom physician-engineered formula using the rinds of citrus fruits, and the supplement works to alleviate GERD symptoms naturally when used alongside lifestyle modifications and as an alternative to antacids. The supplement is dairy-free, gluten-free, non-GMO and is made in the United States.

With GerdLi, there is passion behind the product. Dr. M himself was diagnosed with LA grade D esophagitis and had to be prescribed a proton pump inhibitor.  As a young adult, this was discouraging to him and he became determined to find another way to help manage symptoms. Soon after, he learned about D-limonene and began rigorous research. An American board-certified internal medicine physician with nearly eight years of experience, Dr. M was the perfect person to create the world’s first natural antacid to help manage GERD.

After more than three years of development and three months of testing, more than half of the patients who participated in the GerdLi trial noted an improvement in their symptoms. Dr. M reported that no adverse effects were observed, and soon GerdLi was ready for production. As a physician who works at a hospital, it’s Dr. M’s hope that GerdLi will be able to make a positive impact on GERD patients beyond his reach and across the nation.

GerdLi was created in a facility registered by the Food and Drug Administration and uses the highest quality D-limonene. Because it is comprised of the highest-grade custom ingredients, GerdLi is effective in helping to relieve symptoms and in some cases may be able to help some patients reduce their medication use.

How does D-limonene work?

At the center of GerdLi is the compound derivative D-limonene, which is drawn from citrus fruits such as mandarins, grapefruits, oranges and limes. D-limonene helps naturally decrease stomach acid content, which reduces heartburn.

D-limonene works to alkalinize and reduce stomach acid content in layman’s terms. A colorless hydrocarbon compound, limonene is found to be at its highest levels in the rinds of lemons, where it acquires its name from.

Dr. M, who has presented at conferences across the country and globe, authored book chapters and has been published in high-impact journals, said limonene is rapidly and almost wholly absorbed in the gastrointestinal tract after ingestion, and then is divided into various body tissues after first-pass metabolism in the liver.

D-limonene is not for people who have a history of severe esophagitis, an ongoing history of poor lifestyle behavior or morbid obesity.

Dr. M said GerdLi is for anyone and everyone who is affected by heartburn but doesn’t want to jump straight to medications. In order to begin using GerdLi, he recommends two approaches, depending on the person’s circumstances. The first method is a “step-up” approach, where a user would first begin managing GERD by modifying their lifestyle and diet to be healthier, and then start taking GerdLi. This includes reducing consumption of caffeine and alcohol, eating smaller portions or cutting out carbonated beverages like soda. At this point, the user would start taking GerdLi before resorting to a prescription. With the “step-up” approach, patients can have peace of mind and don’t have to worry about side effects or drug interactions.

The second approach, called “step-down,” would be recommended for stable users who feel stuck in their current medication routine. In this approach, GerdLi would serve as a sort of transition for them, where they would still receive their medication treatment but begin incorporating GerdLi into their regimen.

It’s important to note that GerdLi has not been evaluated by the Food and Drug Administration and is not meant to diagnose, treat, cure or prevent any disease or health condition. In line with beginning any wellness-related therapy or supplement, users should talk with an appropriate health care professional before using. Everyone has their own individual needs based on their pathophysiology, and those with complex, or more serious, health problems may certainly need pharmacologic therapy.

“Take a lover who looks at you like maybe you are magic.” - Frida Kahlo While growing up in Israel, Erez Benari preferred the company...
Read more