Counterculture from the late 1950s was identified by the peace symbol. The rave generation of the 80s had the smiley logo. Now we see the movement against climate breakdown being represented by the extinction symbol, brought to prominence by the recent actions of Extinction Rebellion (XR). 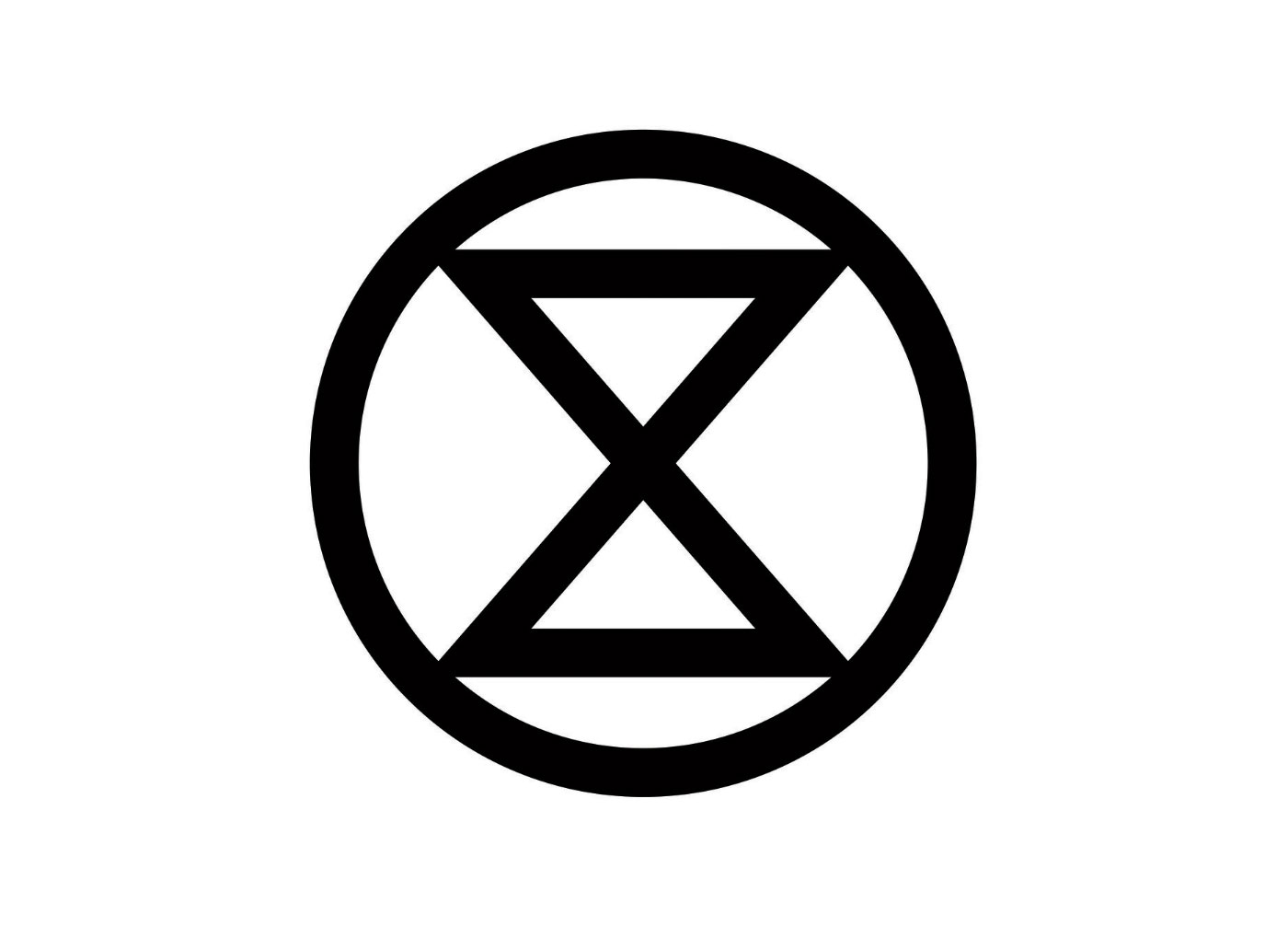 Its growing presence around the world is certainly aided by its simplicity. Just like the peace symbol, it’s easy to replicate, whether spray-painted, embroidered, printed on pin-badges, etc., and as a result it’s easy to remember.

The circle represents earth, while the stylised hourglass signifies that time’s running out. Despite Extinction Rebellion protests in 2018/19 raising awareness of the design, its origins predate the XR movement. In a recent interview for Eco Hustler, the symbol’s designer, an east London artist known as “ESP,” spoke of prior involvement with the UK anti-roads movement and a background in sculpture and printmaking. “I was making protest art about the declines of various individual species for a while,” he said. “But it felt quite inconsequential in relation to the scale of the problem. I gradually realised that the issue was so big that […] it needed something simple that anybody could easily replicate. At the start of 2011 I was just randomly sketching designs and as soon as I drew the symbol I knew what it was.”

ESP emailed around 20 environmental groups, offering the use of the symbol. Only one replied to say they’d use it if it ever got popular, but they wouldn’t circulate it beforehand. That’s when ESP realised he had to put it out there himself, pasting posters and tiles of the symbol on walls around east London.

“I started off by chalking it really large on a wall down Brick Lane and some guys standing across the street were joking around, asking me if I thought I was Banksy or something. I just ignored them and carried on. Then they became curious about the meaning and one said, ‘X marks the spot,’ then his friend said, ‘No, time’s running out.’ I turned around and was like ‘Yes!’ I walked over and gave them a flyer about the extinction crisis that I’d printed off for such occasions. That incident gave me confidence that people could instantly get the meaning of it, even though the design was somewhat stylised for ease of application.”

ESP’s website makes the extinction symbol freely available to those who wish to use it, but makes it clear that it has always been an anti-consumerist project. “No extinction-symbol merchandise exists, and it never will do.” Extinction Rebellion contacted ESP in 2018 about incorporating the design into their movement.

All this is obviously about more than a logo. According to Sir David Attenborough, “the scientific evidence is that if we have not taken dramatic action within the next decade, we could face irreversible damage to the natural world and the collapse of our societies.” His recent BBC documentary on climate change is available on iPlayer, and at the time of writing on YouTube, too (below). Everyone must see this.

Previous articleThese are the best new vehicles of the 2019 New York International Auto Show
Next articleReview: The indestructible humanity of A Boy and His Dog at the End of the World

Pearl by Pearl, She Built a Jewelry Career

The stringing, repair and redesign of pearls are a deeply held passion for Renata Terjeki, one of the few remaining artists of her kind.LONDON...
Read more

As the dust begins to settle on a month of back-to-back international design shows, a mountain of moments from Milan Design Week...
Read more

As the dust begins to settle on a month of back-to-back international design shows, a mountain of moments from Milan Design Week...
Read more